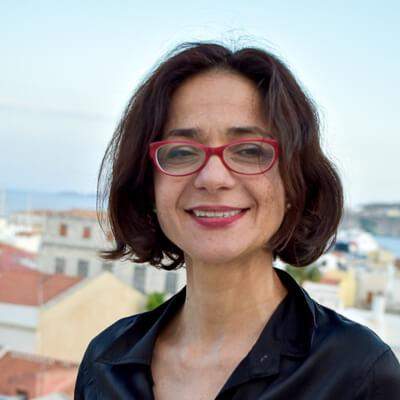 Irene  Leontakianakou is a Lecturer at the Department of Product and Systems Design Engineering of the University of the Aegean, in the subject area of "History of Art”. She holds a PhD (2000), a MA (DEA) (1995) and a bachelor’s degree (Maîtrise) (1994) in the field of History of Art from the Sorbonne University (Paris I, Panthéon-Sorbonne I), Paris, France, where she studied with a scholarship granted by the Alexander S. Onasis Public Benefit Foundation. She also holds a bachelor’s degree in Conservation of works of Arts (Technological Educational Institute, Athens, Greece).

In 2008, she received a grant from the Center of Hellenic Studies at Princeton University for working as a Visiting Research Fellow. Between 2005 and 2017, she was an adjunct lecturer in the Hellenic Open University, in the undergraduate program «European Civilisation» (2007-2017) and the postgraduate program «Graphics & Multimedia» (2005-2007). Between 2001 and 2009, she taught several courses in Art history and theory, as well as in Art conservation theory, in the Graphic Design Dpt. and the Conservation of Antiquities & Works of Arts Dpt. of the Faculty of Graphic Arts & Design, Technological Educational Institute in Athens. Between 2000 and 2013 she worked as an Art historian-Curator of exhibitions at the Hellenic Ministry of Culture, at the Directorate of Conservation of Ancient & Modern Monuments (2000-2002) and at the Dpt. of Exhibitions and Museum Research, Directorate of Museums (2003-2013).

Her research interests focuses on the appropriation of western elements in the Eastern Mediterranean religious painting (13th-18th c.). She also works on different issues of iconography and style that denote the interaction between the East and the Latin West in religious painting during the Late Medieval Era and later (16th, 17th c.). Moreover, she focuses on the analysis of particular works of art or cultural phenomena -such as the gradual abandonment of the “byzantine tradition” in the Ionian Islands in the late 17th c.- which reflect ideological and identity issues within the framework of multicultural societies.

Among her recent research interests is the artistic and curatorial perspective of the ‘Garden’. She has a rich teaching experience at undergraduate and postgraduate levels, teaching courses on diachronic surveys and particular periods of history of art and design, theory of art, as well as art conservation theory. Within the undergraduate program of Product and Systems Design Engineering Dpt., the art history and design history courses offer the theoretical background to some studios, such as Studio I, II (Color & Drawing) and Studio V, VI (Product Design), in a number of selected topics, i.e. civilization of Ancient Egypt, China-Japan, Ancient Greece and The Garden. During 2015-16, she coordinated, in collaboration with the Museum of Cycladic Art, Athens, an educative project entitled ‘Antiquity as a source of inspiration’. Several studios and courses of the Product and Systems Design Engineering Dpt. have worked on this same project. She has successfully accomplished the supervision of final thesis of undergraduate students.